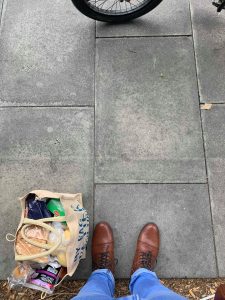 By now I’ve come to terms with how my life had been, is, and will be a matter of creating for myself a clearing in w/c I can write. There is nothing artsy-sentimental about this; it is purely logistics. When I was in my mid-twenties, I quit a newspaper job to do freelance work and start an MA. Those days and years I’d always remember for the endless writing, the untold hours spent poring over drafts and reading and sleeping in my tiny bed surrounded by books. I was always working on a short story or other, and I didn’t even realize that for all my meager resources and not-so-meager doubts and insecurities I managed to build a solid, numinous routine around writing fiction.

But at the same time I knew even then that what I was doing was capricious, quixotic, and ultimately unsustainable, that it was a childish act of refusal to participate in the world of eight-to-fives and NBI clearances and company Christmas parties. When I turned thirty, I returned to the formal workforce, w/c, looking back, coincided w/ the completion of the first draft of what I had decided was to be my first book. I could exhale, I thought: a provisional surrender (I was also fresh off a residency in India where I learned yoga so I was v. zen and v. adept at exhaling). And at this point the manuscript only needed some sprucing up and a few connecting chapters, w/c I was able to do during a couple of longish breaks.

But soon I realized that teaching, w/c I love otherwise, consumed one’s headspace w/ a broad voraciousness I didn’t quite expect. And because I wanted to write another novel (a “proper” one! I can almost hear), I knew there was room in my lazy millennial brain for only one of the two. When my department encouraged people to go do something else for the next couple of years because there were fewer units to go around, I knew it was a good time as any to start a PhD (also, Duterte was turning out to be that kind of president). Less than a year later I was in downtown Adelaide and telling the guy at Vodafone that I was studying to write fiction, to w/c he heartily replied, ‘Really? Don’t you just make stuff up?’

Yep, I thought, isn’t that wonderful? On the little days when I miss my little life, I find myself imagining that un-lived path, w/c is easier because of social media. In group chats and timelines, friends would talk about meeting up at Habanero at 7PM and complain about checking papers and post photos of their Wai Ying congee. There is a version of reality in w/c I didn’t leave Manila, and I sense its intrusion during random moments, conjured innocently by the whiff of carbon monoxide from an old bus, the sodden crunch of lumpia in sweet-and-sour dip, an overheard kwentuhan in Tagalog. None of my dreams take place in Australia, and it feels like a part of me, not least my “lost or unquiet soul” (Mojares), continues to roam around Cubao or Katipunan or Ortigas. The tragedy then: I am gifted three years to write a novel (and a research monograph), but those years cannot coincide w/ my life, at least not to the granular, fulsome extent that I preferred.

The lifelong struggle to carve out pockets of time and resources and mental space for writing is of course no more and no less than an avatar for the similarly lifelong quest toward composure and self-sufficiency. Composure amid the terrors of our days and self-sufficiency from the often alienating, incapacitating institutions through and against w/c we navigate. In writing as in life. I used to fancy myself marginally heroic or subversive in choosing to live in this manner, but now, close to the start of my Jesus year and w/ some freedom to write, I am teaching myself to avoid evaluative adjectives. So the impulse hardens into nature. So the divergence becomes the main path. In writing as in life.