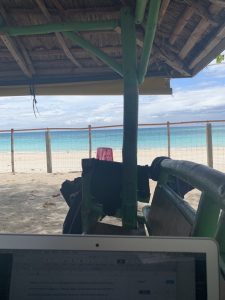 The few friends I’ve told all laughed: it is turning out to be much more difficult to write fiction when you actually have to invent stuff. I am not being facetious (I think), and all writing is invention to some extent; but if anything it points to just how rudimentary my practice of fiction had been, how I had found writing if not easy then often congenial, perhaps because I hadn’t taken full advantage of the imaginative, and therefore political, possibilities that it can summon and dispense.

I had dreamt about this stretch of time when I was in Adelaide, slightly homesick: to be in the mental and physical space, the milieu in which my project takes place, to be deep in “the source material.” It is working in a way. I wrote the first book w/out knowing that I was writing it, on and off over six years, and so whenever life interrupted, as it always did, there was no rush for the writing to catch up. These days, I feel the writing happening alongside the living, if not above it, like a layer of oil. A part of me is always elsewhere, trying to conjure up and occupy that other reality.

At the same time, how strange, fiction’s abiding alliance with reality. It is hard, for instance, to write about the human rights abuses and hardening precarities in mid-2000s Manila as History when its spectre haunts the present. I was in Baguio last month when news broke that NDF consultant Randy Malayao was shot dead while sleeping onboard a passenger bus in Nueva Vizcaya. The killing was hardly isolated, it could be explained and made sensible in political terms, but it was that increasingly rare type of news that immobilized. It was the same combination of shock and helplessness that stole my breath when I heard that activist Jonas Burgos was abducted by military agents in broad daylight at a restaurant in Ever Gotesco Commonwealth in 2007.

And what do I have? Impotent anguish and a wholly arbitrary self-imposed 1,000-word daily quota. This world will never run out of things that will make writing feel inadequate and selfish even as I know that I will spend the rest of my life doing it. The reminder is always sobering and necessary but also, in the worst of days, debilitating. Earlier today, over champurado in Los Baños, I told Christian the general contour of what I wanted to do for what I hope to be my second book. Necessary or not in the grand scheme of things (although what is, really), I remain convinced of fiction’s unique, productive way of engaging reality.

When I turned 33 two weeks ago I was at the beach. I had learned that I have a Pisces moon–“Living on or nearby water is perfect, but trips to the seaside, going fishing or strolling along the riverbank will serve just as well”–and so when the February restlessness visited on cue it made sense to foist its resolution on dead stars and planetary energies and their purported meanings. Days before I flew to Adelaide, I saw Danton at the department and he told me, w/ sufficient histrionics, to stay away from water; he had a premonition of me flailing against a huge wave, he said. Everything is fiction. Nothing is fiction. What a relief.