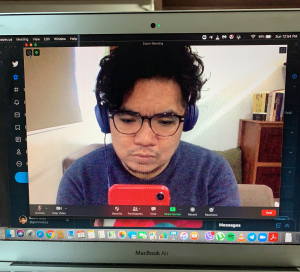 I took this photo one day in Oct last year shortly after I found out that Y had been longlisted for a couple of prizes. What a ******* year, went my vague pabebe post on Facebook, and well-meaning friends dutifully offered their needless commiserations. These days, months after that heady afternoon and after hearing less heady news about one prize (the other, we couldn’t see eye to eye re the contract), I continue the habit of counting the days after every paranoid encounter w/ fellow humans, relieved whenever I’d get to day ten, typically when symptoms would have shown. Nearly a year after it all started, I still wake up morosely celebrating every fever-less morning, every moment when my throat didn’t itch, my breathing neither short nor hampered beyond the usual allergy. Every day at four I check Twitter for the number of new cases, my cue to be despondent or semi-cheery, as if government data ain’t garbage. Survival as a feat.

A new tattoo a few weeks ago, in one such paranoid encounter. Finely drawn outline of treetops–endemic species all of it, I was assured–on the left forearm, heavyhanded counterpoint to the city on the other. While A was getting his, a sad-happy song played on loop, his face and exposed clavicle half-lit by the four o’clock sun. 2,109 cases that day. I nursed a bottle of beer, the limit as ordered by the artist. It was a week or so before I’d turn 35, and I remember the banal jolt of realizing that things, these things, could still happen, so barren and featureless the weeks, the months, the year. As the needle went to work later, I put my earphones on to listen to Jaya, w/c worked well the last time I got a tattoo almost exactly a year ago, but w/c now somehow strange, too mellifluous, soft. Told someone I might have been happy because I felt the pain, in that misery-numbness, physical-emotional quadratic equation that I’d never be able to fully unpack. Alfon: ‘.. pain you must ration, especially this pain, w/c neither I nor anyone again, will ever be able to give to you in like manner, in like forgetting.’

If the unconscious is the final frontier, the pandemic has breached mine. At least a couple of times recently, in hard-to-come-by deep sleep I dreamt of being mask-less in a crowd. The other details receded in the morning, or night, except the anxiety and the rage over the anxiety. For a while I did this thing in w/c I didn’t buy a mask (and later a face shield) and tried to survive on good old fashion arbor–five from the house, five from O, half a box from A. Repeat. News of the UK variant and overheard advice about double-masking sent me straight to Lazada one anxious night to order way too many KF94s, half of w/c remain unopened a month later. But I had also written a story set during the pandemic, w/c tells me I had calmed down enough, cleared my head enough to turn something into fiction. Probably crap, not least as it was my first attempt at Tagalog, and while the language was easy enough the rest of it, i.e., the fiction, was not, and often it felt like transplanting a half-grown tree onto a hospitable but suspicious soil.

In Adelaide, from where I flew early last year eager to do additional field research for Y, my day would begin at around 10, M and J by then already gone, the dishes freshly washed post-breakfast, the air faintly smelling of their perfume. I’d take the 11:15 bus to the city and get there just in time to avoid the lunch crowd. I liked eating at the food court at Rundle Mall, alone but around people, eating something I like, usually Indonesian or Vietnamese, and more importantly w/c I didn’t have to make. I’d troop to my suki Cibo for a flat white to go then walk either to my office or the library, where I’d work until five. I am back in the house by half past six, or earlier if I was in charge of dinner, w/c was always slow, prolonged. I’d resume work at 10 or so, often until around 3. There is a running joke in the house about the usual ding of the microwave in the small hours. In one of the last days in w/c we three were complete, we played Monopoly. All my things, including the Monopoly, were shipped out of the city last month; the books in my office by my department, my leftover luggage by M.

When I think of 2020 I’d think of that long summer, of worrying about a persistent malaise, lining up for two hours at the grocery, breaking down every other day. I’d think of C and A’s rooftop, easy laughter limned by candle light. I’d think of laughing at my own stupid laughter as heard in the podcast I record semi-religiously w/ E. I’d think of that long car ride w/ R to the foothills of Rizal. There was a two-month span in 2019 when I had to fly so much, a dozen flights easily, that I vowed to not fly for the entirety of 2020. As of today, I haven’t crossed the Pasig in a year. These days, on this year of staying put, the itinerary of my errands can be plotted over a two-kilometer stretch, invariably ending w/ a perilous crossing of a service road to get to the part under the Katipunan bridge where the UP jeeps, allowed to return to the road just months ago, waited for passengers. My heart would always skip a beat, and I imagine lining up to find the usual Katips friends in the queue as if it’s 2006. Except one is in Texas (hopefully w/ power), one in Bangkok, one in Rizal (destination of the aforementioned long car ride). What is time? What is space? Did I mention: 2,288 cases lodged today.