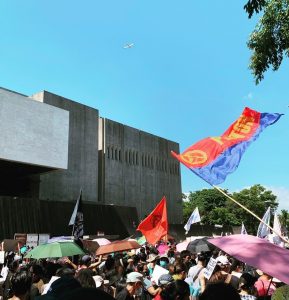 These days, like many, I struggle to think about how to continue in the aftermath of the unthinkable (i.e., marking student papers while the criminal son of a dictator stands on the doorstep of Malacañan, the idea of history and justice manhandled in the most public of platforms). When, the day after the elections, a surly Grab driver described Leni Robredo to me as ‘masamang tao’ and her defeat as a sign meaning ‘wala na silang maloloko,’ I remembered a childhood habit of picking up a newspaper from the newsstand and reading it from cover to cover and realized that the comfort of that world made stable in its knowability is gone. Long gone, some say. In some ways, I feel, my grief is over the disappearance of this assumed consensus, the breakdown of a conversation also known as Anderson’s imagined community (see also Wataru Kusaka’s Moral Politics). Something fundamental was upended, and somehow everything also unceremoniously continues. W/c is why it all feels disorienting, vertiginous, claustrophobic. My grief is the imagination trying to come to terms w/ these rifts, this swelling chasm between the current state of things and the less cruel possibilities (a tropical weltschmerz). It is part disbelief, part rage, part helplessness.

These days, I remember the impending Marcos regime every time I laugh, a dour aftertaste (I am at the tail-end of an UNHhhh marathon, an escape begun the moment the results, and the machinations, became obvious). It’s been observed that the victory has seemed joyless, angry and resentful even–like kuya Grab driver–compared to the pink effusion that, periodic in-fighting and matapobre moves aside, radiates something akin to a vaguely hopeful, upbeat energy. Is that a class thing? Where are the victory parties? Why is there no dancing in the streets? The numbers are for sure bloated, but maybe the attendees are working: bagging groceries, delivering overpriced coffee, driving jeepneys despite the heinous fuel prices. This lacks nuance, of course–oligarchs helped bankroll the Marcos campaign and local politicians sold their fiefdoms to ensure his victory, while Robredo won in poor, remote towns such as Calauit of The Kingmaker fame and many working class people mobilized to join the uphill fight. Class is perhaps more useful in predicting who will bear the brunt of this regime’s violence. After all, Bongbong’s economic team will consist of old faces from the Estrada, Arroyo, and Aquino cabinets, signaling a coherence in policy. Of course. Cue the sighs of relief from Ayala Avenue. The march of neoliberalism, of capital continues, perhaps even faster, more surefooted, and, after a six-year rehearsal under Duterte and w/ counterinsurgency all but built in to governance, more violent against dissenting ideas, this time w/ little care even for performative tolerance, ready w/ its tags for anything against it–terorista, komunista, enemy of the state, ayaw sa unity. To capital, a Marcos presidency is not an existential emergency, just another frontier to conquer, another chance to consolidate its gains, but also kindling to its inevitable combustion (see also a generation politicized, if not radicalized by the dystopian political situation).

Speaking of. I was born February 1986. Came of age out of the crises that attended Gloria Arroyo’s decade in power, she who is back just a decade after a disgraceful exit. I am also old enough to remember elections in w/c Imelda or some KBL surrogate like Eddie Gil or Jay Sonza ran, and in placing poorly their candidacy was always seen as delusional and even funny, not a growing threat that had to be nipped at the bud (or neck). Then in 2010, two years before Facebook went public, 13 million voted for Bongbong as senator, good enough for 7th, the first alarm, but perhaps having an Aquino as president lulled people into complacency. Then 2016 happened, then 2019, then 2022. A culmination of a family’s effort but also an incremental surfacing of a basket case society’s unresolved contradictions. For all the emptiness of the local party system, the Duterte-Marcos machine manage to durably tether a generation’s worth of discontent–on the failure of trickle-down economics, the elite capture of post-EDSA state-making, etc–to the liberal party, the ‘dilawan’ stain that Robredo couldn’t brush off. Might we (generously) read this as the elections being predictably animated by the eternal rupture that is class antagonism? To w/c the Marcoses, the untiring criminals that they are, spent decades to engineer themselves to be the beneficiary. Take a bow, democracy.

How to proceed? I couldn’t plan anything beyond May 9, and three weeks hence my calendar is beginning to fill anew, even if the shock and awe still hasn’t abated. The shock and awe from the speed and efficiency of the canvassing found nowhere else in the Philippine bureaucracy, clearly meant to paralyze and immobilize after the high of a buoyant campaign. For now I’ve fortified my tiny echo chamber, muted BBM and Bongbong and other nearby words–I still couldn’t watch him or Imee or Imelda without being physically ill. I’ve yet to read the many smart postmortems from all quarters and the plaintive elegies to democracy. Just drinks slash debriefing w/ friends, collectively processed worries and takeaways and laughed even if the laughter was impaired by a horrible permanent thought. Some gatherings, including a recent book launch where I heard something that I think I’ve been waiting to hear: Calm down. Kalma. W/c to me sounded both practical (anxiety expends energy) and historical (a Marcos return used to be unthinkable until it wasn’t, and w/ work we can make it unthinkable again). Post May 9, I now think of dates in relation to June 30, when all of these failures would be formalized to no doubt uproarious applause. After that, there will be another date to crawl toward. SONA? First 100 days? Next inom? History is cumulative and accretive. Things count, even setbacks and squandered victories. So I tell myself calm down, do the work, laugh and brace, one day at a time.