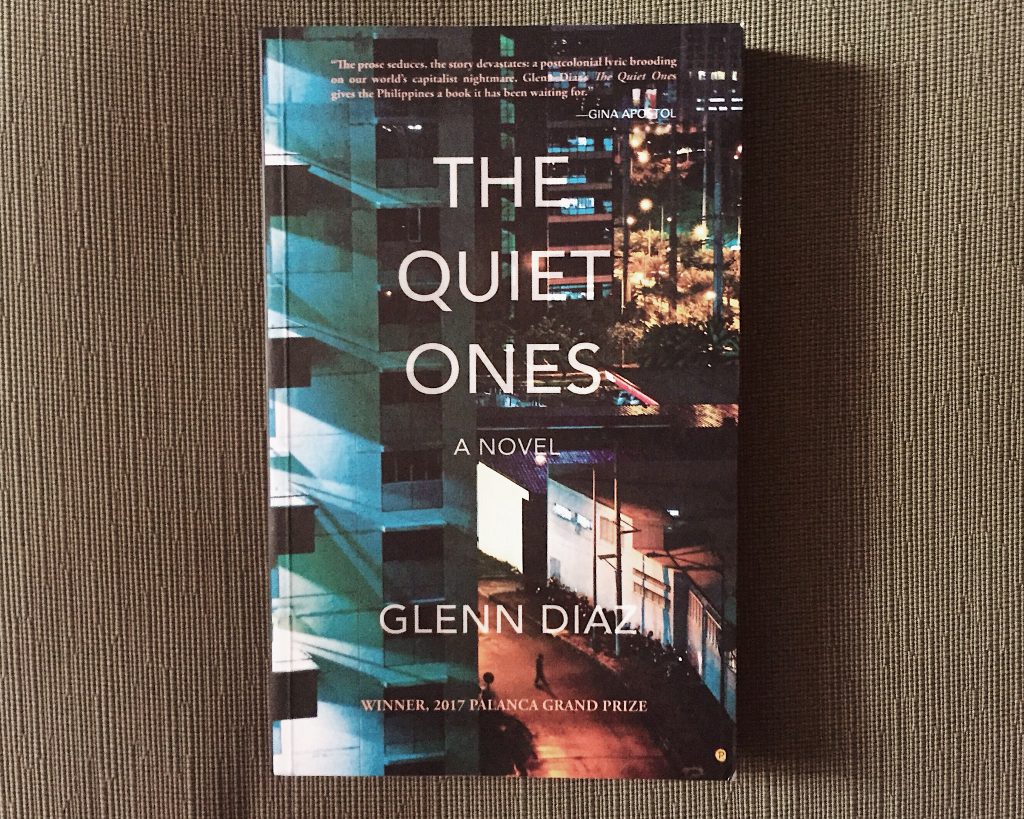 “The prose seduces, the story devastates: a postcolonial lyric brooding on our world’s capitalist nightmare. Glenn Diaz’s The Quiet Ones gives the Philippines a book it has been waiting for.”

“The Quiet Ones is the best contemporary book on the psychogeography of Manila I’ve read, a sharp, funny, deeply moving meditation on global capitalism—and its ancestor, coloniality—as filtered through the rise of the Filipino call center. It’s a must read on the very material lives behind what is sometimes called ‘immaterial’ labor.”

Elaine Castillo, author of America Is Not the Heart

During a regular shift at the call center, Alvin Estrada discovers a way to embezzle money from the American telecom giant for which he mans the phones. Soon a couple of friends join in, and the operation proceeds smoothly up until they quit, vowing to take the secret to their graves. A month later, a phone call at 4 in the morning tells Alvin that the police are on their way.

At once a workplace novel and a meditation on history and globalization, The Quiet Ones is a grimly humorous take on a soul-sapping, multi-billion-dollar industry. In interlocking narratives, it explores lives rendered mute by irate callers, scripted apologies, and life’s menial violence, but which manage to talk back every now and then, just as long as the Mute button is firmly pressed.

“[The Quiet Ones] begins like a thriller: a man in an airport, a suspicious black bag, the police not far behind … But swiftly, the pretense of a crime story is discarded. What unfolds is a tale at once intimate and sprawling, in which the minutiae matter just as much as the most prominent plot points.”

“But what really makes the book both so funny and heartbreaking are the lives of its many protagonists which are, in many ways, their own but not quite; lives that are connected but not in the sticky, sappy way we imagine them to be … it makes you laugh and cry and wonder why—and more importantly, how—you got the book’s depressing humor.”

“The thematic scope of the project, and the frustration that fuels it, make for—and this might come as a surprise—a fun book. The Quiet Ones is buzzing with wit, told in an acerbic voice that never yields, no matter what … Its genius is that it employs a voice smart and punchy enough to confront the cultural context it is attempting to illustrate.”

“Glenn Diaz’s The Quiet Ones [is] a novel that has skillfully painted the grime of Metro Manila in the most Waze and Cartier-Bresson manner, the gloom of the BPO milieu, the infectious dregs of capitalism, and the prison called globalisation … The contact centre heist-crime thriller slant is simply an enticing opening bait; it’s more about real human beings—working-to-lower middle class and Filipino and naked to the bone and disenchanted and wanting—transparent to an extent you could plunge into their foibles and taste their innermost desires, and distinguish the moral nuances that separate characters from each other and even lump them together.”

“A witty, barbed account of a call center full of misfits attempting to navigate a world that has increasingly little to offer them … An impressive, sure-footed debut, full of irreverence and vigor.”

“Highly discursive and meandering, it was able to grip the reader’s attention to diverse consciousness that are world-weary yet humorous. It is a timely work that brings to our attention the cost of our keeping afloat in global dreams that are not quite our own, and unquiet still.”